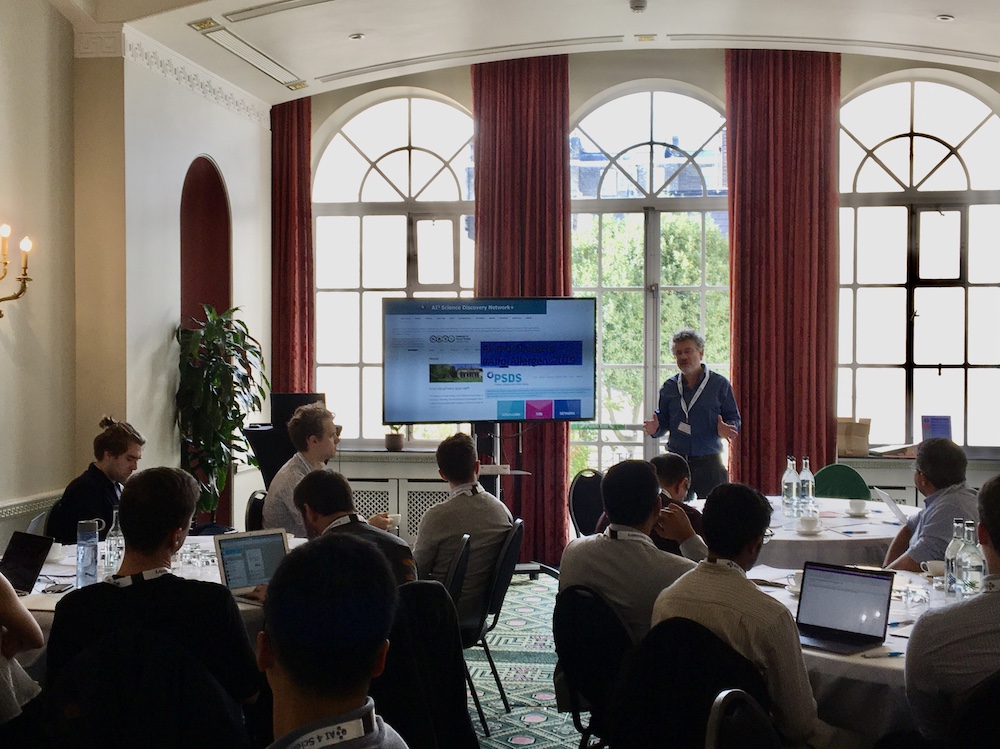 On the 17th October 2019 AI3SD, IoFT (The Internet of Food Things Network+) and members of the Food Water and Waste Research Group at the University of Nottingham teamed up to host an event on AI for Allergen Detection and Smart Cleaning within Food Production. Here is a blog post written by Michelle Pauli about the event. You can find full coverage of the presentations and working group discussions in the main report, also written by Michelle Pauli which can be found here: https://eprints.soton.ac.uk/437031/.

Another blog post written about this event by Dr Nicholas Watson from the University of Nottingham can be found here, and Nicholas’s report on the event and other related activities as part of their cleaning projects can be found here.

Ever wondered how you quickly measure the fieriness of Tabasco, the ‘gingerness’ of ginger or the pungency of garlic? It might seem like little more than a fun party trick but what if you could apply the same low-cost techniques to detect e-coli in food, with the goal of doing so in minutes rather than the current need to send food off to labs for three days of testing? How might such breakthroughs be applied to detecting allergens in food during production – a life and death matter for those affected? This may be a relatively straightforward with liquid foods – drinks and sauces – and foods that can be put in aqueous solutions for testing but how do you test for the presence of a single sesame seed in a whole batch of bread loaves?

Detecting, responding to and alerting consumers to allergens in food production is a huge challenge for the food industry. According to the Food Standards Agency in 2018, the number of food safety events relating to allergens more than doubled between 2014 and 2017, despite the increasing awareness of allergies and their triggers. And, as allergies increase, so too do the difficulties of managing the food production process for allergens. Cleaning production lines – both the visible parts and those hidden away in the engineering – is more essential than ever but is also increasingly time-consuming and expensive, not least with our ever-burgeoning demand for different varieties of food: where once a production line might be dedicated to a long run of a single type of bread, it now has to accommodate low-gluten bread, low-salt bread and more, with vital cleaning needed between each batch. Meanwhile, there is also the requirement to label foods ever more accurately, to inform consumers in fine detail what is in their food. If that single sesame seed might be there, it should be on the label.

Which is where industry 4.0 technology comes in – particularly the combining of artificial intelligence (AI) and the Internet of Things (IoT). Towards the end of last year, a workshop was held in London to bring these technologies together in pursuit of better allergen detection and awareness. Held jointly by Internet of Food Things Network+ (IoFT+) and AI3 Science Discovery Network+ (AI3SD+), the event brought together researchers, industry representatives, regulators and policymakers to consider the entire food chain, from producer to consumer, and all the processes that ensure we know what is in our food.

Discussions began by looking at pioneering work in three areas – the use of robots for factory cleaning, sensors for e-coli detection and the potential of AI in the field, including machine learning and the concept of ‘augmented intelligence’, which brings together the strengths of both artificial and human intelligence. Can AI-driven robots improve cleaning? Reductions not only in downtime but in other costs are highly desirable – 30% of energy in dairy processing and 35% of water in beer production are spent on cleaning. Food safety might also be improved. A combination of AI robotics and low-cost ‘cleanliness’ sensors might reduce the amount of time taken to declare each area clean, while intelligent robots might interpret allergen sensors to recognise something that should not be there and raise an alert. The workshop heard from a pioneering multi-disciplinary project, RoboClean at the University of Nottingham, that is making significant progress towards such goals.

The traditional, gold standard analytical lab test to confirm the presence of e-coli in food takes three days. At the workshop, Zimmer and Peacock, the company behind a product that measures the hotness of Tabasco sauce – using, essentially, a low-cost sensor, a meter and a smartphone app – described how they are applying it to e-coli detection, with the goal of bringing down the speed of detection to just 30 minutes. Applying this to allergens is more complex. Liquids are homogenous: they are the same throughout and so a sample can be extracted for testing. But what of that sesame seed that might or might not be somewhere in those many loaves? You can’t just sample some of the bread.

Many questions around allergen detection and response go beyond sensors and robotics into practice and ethics, which became a focus for a large part of the event. Robot cleaners need to work with people on factory lines, who cannot be expected to have expertise in robotics. They may also do work that people are presently doing, which raises its own questions. Meanwhile, the event heard, there are considerable practical and ethical questions yet to be resolved around the collection and use of data, built-in biases of allergen data collection and the impacts of allergen control. Allergen research is focused towards western countries, their diets and ethnic groups. There is also bias towards studying mild food allergies because of the risks of things going wrong with severe, life-threatening allergies.

And a highly restrictive diet that excludes allergens may increase intolerances, so the cleaner we make our environments, the more we are effectively introducing more intolerance. It was noted that children who grow up on dairy farms have been found to have fewer allergies than other rural children. So we need safe exposure, but also safe foods. Is there a risk we reach a point of cutting out all allergen-based foods and producing a negative impact? The workshop concluded that such industry 4.0 technologies as AI and IoT-enabled sensors offer much potential to help with allergen detection, awareness and exposure in the food chain. Some applications are already in production and others show great promise. It was felt that the discussion between people from academia, industry and policy was an excellent starting point for what is a highly complex issue deserving continuing attention.

IoFT+ and AI3SD+ will be publishing a position paper in 2020 as the next step in addressing the challenges. Meanwhile, the more complete workshop report can be downloaded here and anyone with a continuing interest should join the IoFT+ and AI3SD+ mailing lists, which confers membership of the networks.

The presentations given at the beginning of the event were:

The main themes of the workshop were:

The original event page can be found here.