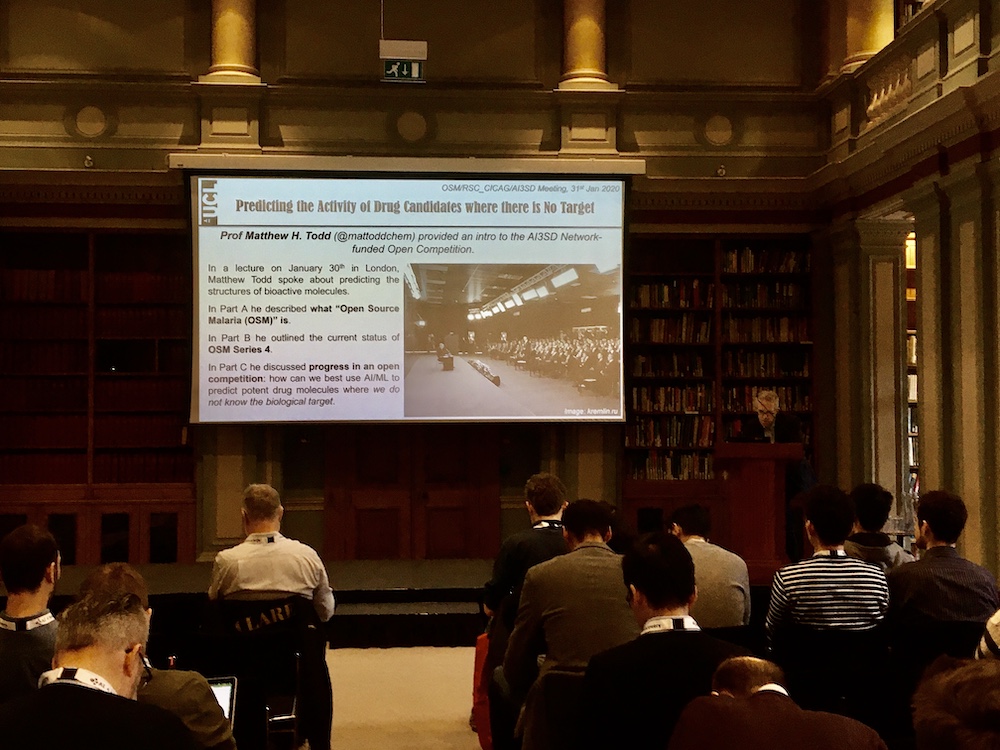 Back in January 2019 AI3SD announced their first funding call. We funded 3 pilot projects, and one of the successful applicants of this funding call was Professor Mat Todd from UCL, with the project entitled “Predicting the Activity of Drug Candidates where there is No Target”. More information can be found in the Interim Report of this project. The final report is coming soon.

A full report on this event was written by Dr Chris Swain and can be downloaded from here: https://eprints.soton.ac.uk/438123/.

The discovery of new antimalarial medicines with novel mechanisms of action is key to combating the increasing reports of resistance to our frontline treatments. The Open Source Malaria (OSM) consortium have been developing compounds (”Series 4”) which possess potent activity against Plasmodium falciparum in vitro and in vivo and have been suggested to act through the inhibition of PfATP4, an essential ion pump in the parasite membrane that regulates intracellular Na+ and H+ concentrations. This pump has not yet been crystallised, so in the absence of structural information about this target, a public competition was created to develop a model that would allow us to predict when compounds in Series 4 are likely to be active. In the first round in 2016, six participants used the open data collated by OSM to develop moderately predictive models using diverse methods. Notably all submitted models were available to all other participants in real time. Since then further bioactivity data have been acquired and machine learning methods have rapidly developed, so a second round of the competition was performed, with 10 models submitted. The best-performing models from this second round are being used to predict novel analogs in Series 4 that will be synthesised and evaluated against the parasite. As such the project will openly demonstrate the abilities of new machine learning algorithms in the prediction of active compounds where there is no confirmed target, frequently the central problem in phenotypic drug discovery.

This meeting was to conclude and present the results of this competition. Data on active and inactive compounds in one OSM antimalarial series were published online, and anyone was able to submit a model able to predict the actives. The models were judged against a dataset that was kept private, and the winners were asked to use their models to predict novel molecules. These are currently being made in the lab and biologically evaluated, and the results were reported at the meeting, providing a real-world test, and a complete case study, of the capabilities of ML/AI approaches to accelerate modern drug discovery. Presentations were given by some of the eleven competition entrants about how their models were constructed, and other presentations were given on related developments.

The presentations given are listed below:

The original event page can be found here.