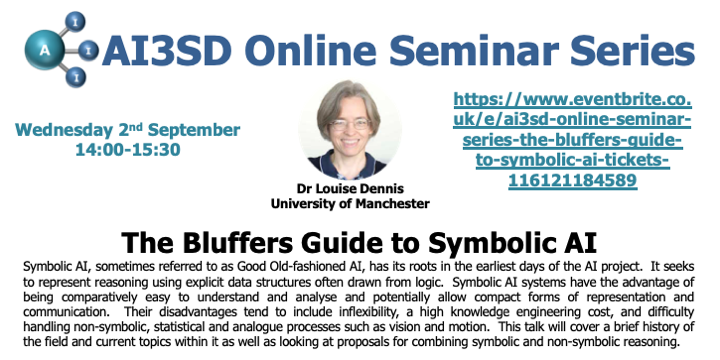 Abstract: Symbolic AI, sometimes referred to as Good Old-fashioned AI, has its roots in the earliest days of the AI project.  It seeks to represent reasoning using explicit data structures often drawn from logic.  Symbolic AI systems have the advantage of being comparatively easy to understand and analyse and potentially allow compact forms of representation and communication.  Their disadvantages tend to include inflexibility, a high knowledge engineering cost, and difficulty handling non-symbolic, statistical and analogue processes such as vision and motion.  This talk will cover a brief history of the field and current topics within it as well as looking at proposals for combining symbolic and non-symbolic reasoning.

Biography: Louise is a senior lecturer at the University of Manchester where she is part of the Autonomy and Verification group. She is a member of the IEEE Global Initiative for Ethical Considerations in the Design of Autonomous Systems and the IEEE Standards working group for Transparency for Autonomous Systems (P7001). She is currently co-investigator on two EPSRC Hubs for Robotics in Extreme and Challenging Environments: Future AI and Robotics for Space (FAIR-SPACE) and Robotics and AI for Nuclear (RAIN). Her expertise is in the development and verification of autonomous systems with interests in rational agent programming languages, and architectures for autonomous systems, with a particular emphasis on ethical machine reasoning and creating verifiable systems.