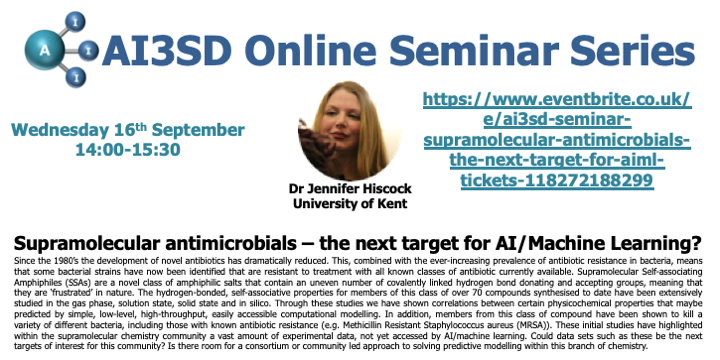 Abstract: Since the 1980’s the development of novel antibiotics has dramatically reduced. This, combined with the ever-increasing prevalence of antibiotic resistance in bacteria, means that some bacterial strains have now been identified that are resistant to treatment with all known classes of antibiotic currently available. Supramolecular Self-associating Amphiphiles (SSAs) are a novel class of amphiphilic salts that contain an uneven number of covalently linked hydrogen bond donating and accepting groups, meaning that they are ‘frustrated’ in nature. The hydrogen-bonded, self-associative properties for members of this class of over 70 compounds synthesised to date have been extensively studied in the gas phase, solution state, solid state and in silico. Through these studies we have shown correlations between certain physicochemical properties that maybe predicted by simple, low-level, high-throughput, easily accessible computational modelling. In addition, members from this class of compound have been shown to kill a variety of different bacteria, including those with known antibiotic resistance (e.g. Methicillin Resistant Staphylococcus aureus (MRSA)). These initial studies have highlighted within the supramolecular chemistry community a vast amount of experimental data, not yet accessed by AI/machine learning. Could data sets such as these be the next targets of interest for this community? Is there room for a consortium or community led approach to solving predictive modelling within this branch of chemistry.

Biography: Jennifer obtained her PhD from the University of Southampton (UK) under the supervision of Prof. Philip A. Gale in 2010 studying supramolecular host:guest chemistry. She continued her post-doctoral research between this group and Dstl (Porton Down – UK) until 2015 when she moved to the University of Kent (UK) as the Caldin research fellow. In 2016 she was awarded a permanent lectureship position at that same institution, which has since been followed by her promotion to Reader in Supramolecular Chemistry and Director of Innovation and Enterprise for the School of Physical Sciences in 2019. In 2020 she was awarded a UKRI Future Leaders Fellowship, developing novel cell surface active therapeutics and drug adjuvants. Her research currently focuses on an interdisciplinary approach to applying supramolecular chemistry to solve real-world problems.