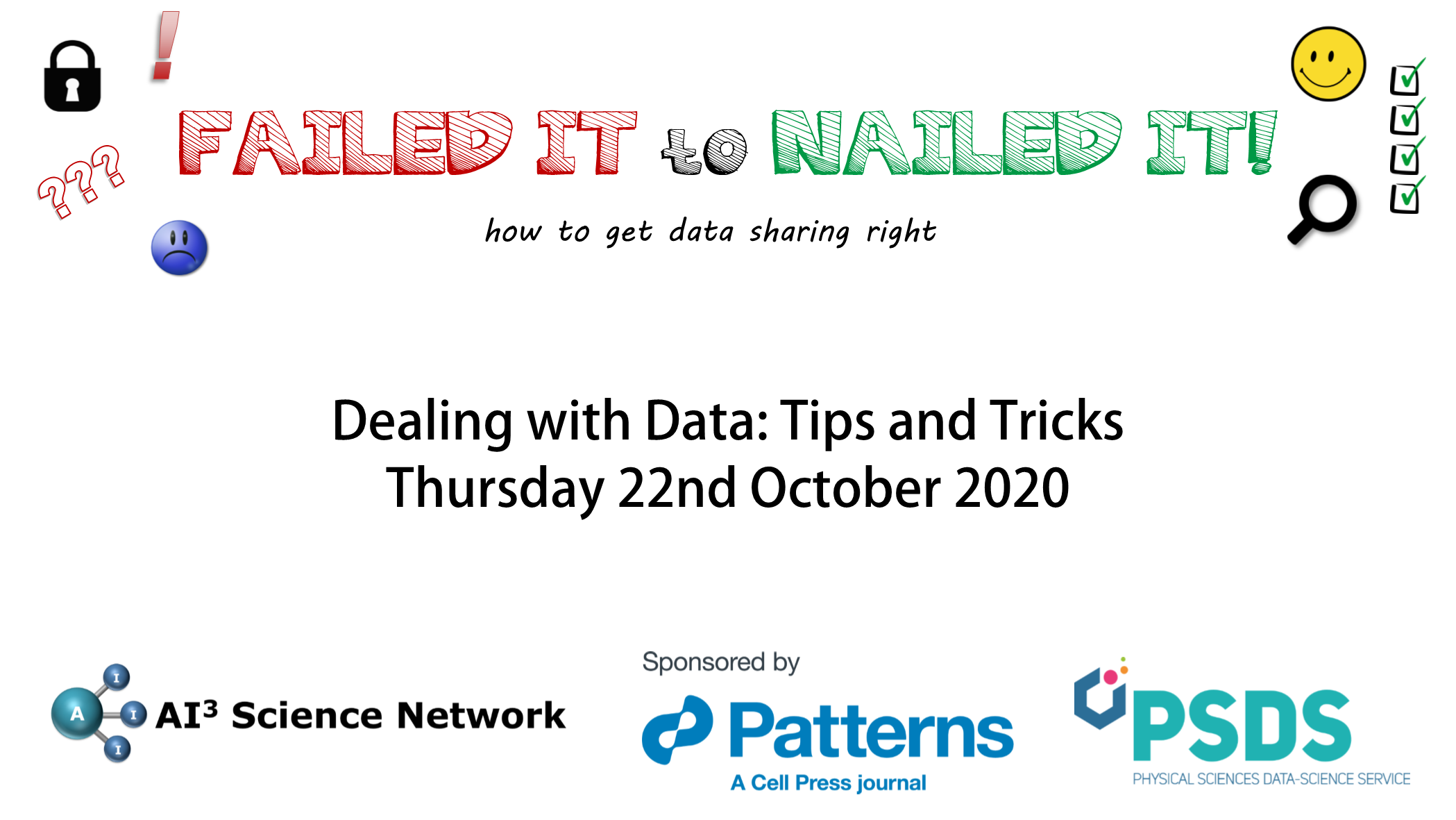 This event was the first of the `Failed it to Nailed it’ online data seminar series. The event was hosted online through a zoom conference. The event ran for approximately three hours in an afternoon session. There were three talks given on the topics of data management and data sharing both from a domain agnostic point of view and from specific domain experts. These talks were followed by an interactive panel session with six early career researchers (ECRs) talking about their experiences in working with and sharing data. Dr Samantha Kanza and Dr Nicola Knight produced a full report on this event summarising both the talks and the panel sessions which can be found here: https://eprints.soton.ac.uk/445061/. Below are the three videos of the talks with speaker biographies, followed by details of the ECR Panel.

Love notes to the future: the importance of metadata (Ms Isobel Stark – University of Southampton)

Isobel Stark is the University’s Research Data Development Manager. Isobel has worked in academic libraries since graduating with an MA in Librarianship from the University of Sheffield in 1994. In that time both libraries and how users access information have changed considerably. Isobel works in partnership with other university services and researchers to ensure that research outputs are effectively captured, recorded, stored and shared, maximising the exposure of research to public and academic audiences. In addition as part of the Library Research Engagement team she is available to help with Open Access, Data Management, Measuring Impact (Bibliometrics) Systematic Reviews, Theses and other research related matters.

John Overington holds a first degree in chemistry and studied for his PhD on comparative protein modelling, drug design, and sequence-structure relationships with Sir Tom Blundell at Birkbeck College, London. After a postdoctoral fellowship with the Imperial Cancer Research Fund, London, he joined Pfizer Central Research in the United Kingdom and eventually became manager of the Molecular Informatics, Structure and Design Department, where he was responsible for cheminformatics, structural biology, target analysis, and molecular modelling. He joined Inpharmatica in 2000; Inpharmatica was acquired by Galapagos NV in December 2006. There he was Senior Director, Discovery Informatics of the Galapagos subsidiary BioFocus DPI. In October 2008 he was appointed Team Leader, Chemogenomics at the European Molecular Biology Laboratory (EMBL), working at the European Bioinformatics Institute (EMBL-EBI) in Hinxton, U.K. where he established and ran the ChEMBL group. Following that, he spent two years as VP Biomedical Informatics at BenevolentAI. He became Chief Informatics Officer at Medicines Discovery Catapult (MDC) in 2017.

Mark Warne, was appointed as Chief Executive Officer of DeepMatter Group plc on the 2 July 2018. Mark, who joined DeepMatter as a Non-Executive Director in September 2015 also served as its Executive Chairman between April 2017 and July 2018. Mark is widely recognised in the UK and International life sciences sector, having spent almost 10 years at IP Group Plc, a leading intellectual property commercialisation company, where he led the Healthcare team. He managed a portfolio of £330m of net assets in 2016/2017 and represented IP Group on the boards of both listed and private companies. In 2018, concurrent with the integration of Touchstone Innovations into IP Group, Mark became a Partner in the Life Sciences division. He joined IP Group from pre-clinical drug discovery CRO, Exelgen, where he was Managing Director. Mark spent eight years at Exelgen (formerly Tripos Discovery Research) where he also held positions in licensing and strategic affairs, project management and research. He has a PhD in Computational Chemistry, an MSc in Colloid Science and a BSc in Chemistry, all from the University of Bristol. Mark is a Chartered Chemist and member of the Royal Society of Chemistry. He serves as a non-executive director on the boards of Open Orphan plc and Ixico plc.

The ECR Panelists are: