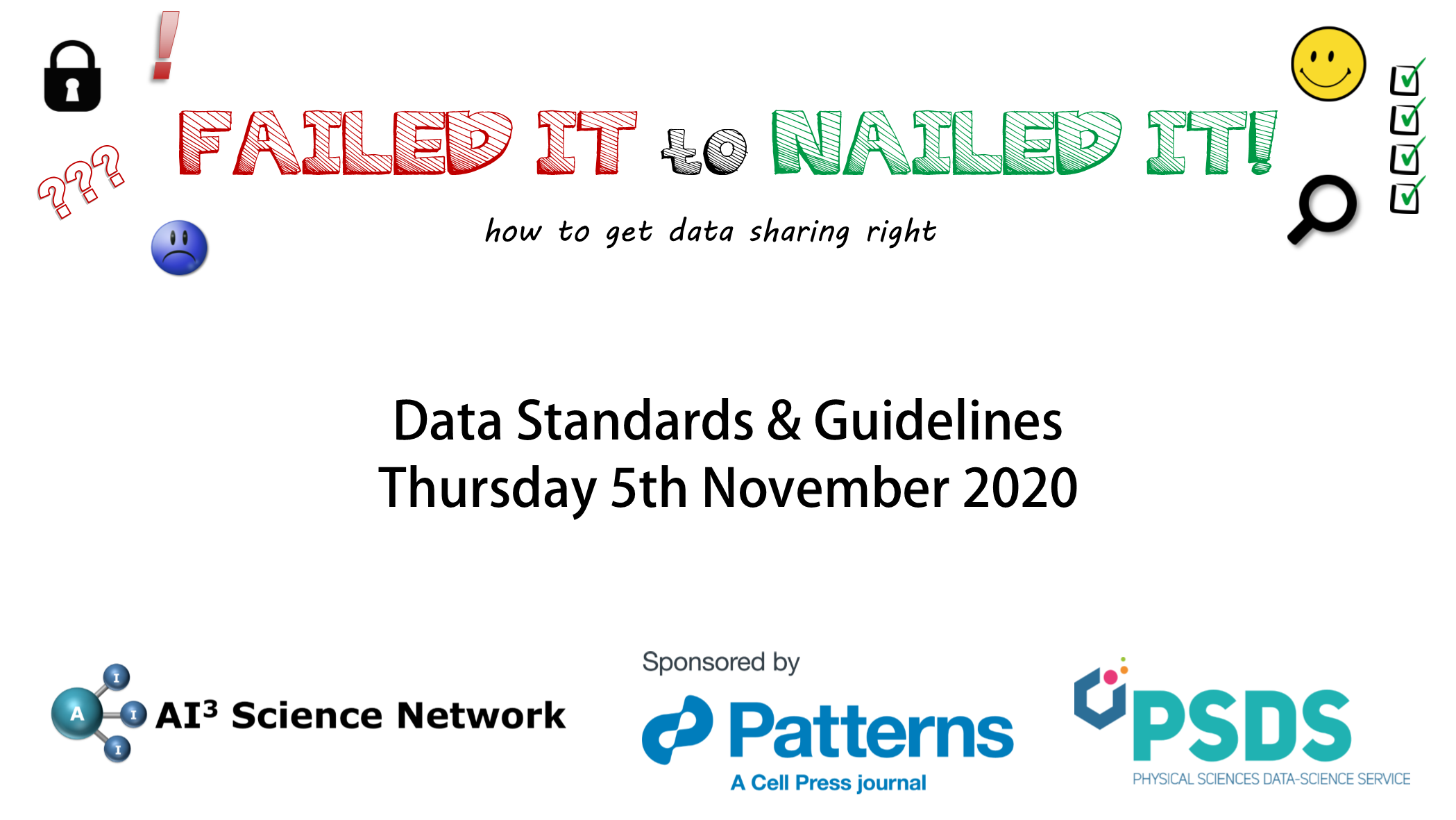 This event was the second of the `Failed it to Nailed it’ online data seminar series. The event was hosted online through a zoom conference. The event ran for approximately 3 hours in an afternoon session. There were 3 talks given on the topics of metadata, open data and linked data covered mainly from a domain agnostic point of view. These talks were followed by an interactive panel session with experts from each of these topics talking about their experiences with data standards and guidelines. Dr Samantha Kanza and Dr Nicola Knight produced a full report on this event summarising both the talks and the panel session which can be found here: https://eprints.soton.ac.uk/445483/. Below are the three videos of the talks with speaker biographies, followed by details of the Panel.

MD DPhil is the Chief Executive Officer of Arctoris, the world’s first fully automated drug discovery platform that he cofounded in 2016. He graduated as a medical doctor from the University of Freiburg in Germany, followed by his DPhil in Oncology as a Rhodes scholar at the University of Oxford. Martin has extensive research experience covering both clinical trials and preclinical drug discovery and is an active member of several leading cancer research organisations, including EACR, AACR, and ESTRO. In recognition of his research achievements, he was elected a member of the Young Academy of the German National Academy of Sciences in 2018.

Christopher Gutteridge is a Systems, Information and Web programmer, part of iSolutions in the School of Electronics and Computer Science at the University of Southampton. He is known for being the lead developer for EPrints and for being an advocate for Open Data, Linked Data and the Open Web. He has won several awards including The Times Higher Award (for the Southampton open data service) and the Jason Farradane Award “in recognition of outstanding contribution to the information profession”.

Dr Nurmikko-Fuller is a Senior lecturer in Digital Humanities at the Australian National University. Her research involves interdisciplinary experimentation into the ways digital technologies can be used in the Humanities, Arts, and Social Sciences, including the role of gamification and informal online environments in education. She is a member of the Australian Government Linked Data Working Group, a Fellow of the Software Sustainability Institute, UK; and a eResearch South Australia (eRSA) HASS DEVL (Humanities Arts and Social Sciences Data Enhanced Virtual Laboratory) Champion, as well as iSchool Research Fellow at the Univeristy of Illinois at Urbana-Champaign, USA (2019 – 2021) and a British Library Researcher in Residence. In 2020, Dr Nurmikko-Fuller was appointed a member of the Territory Records Advisory Council, Territory Records Office, Treasury and Economic Development Directorate, Australian Capital Territory (ACT) Government. She is on the Steering Committee of Linked Pasts, an international consortium for Linked Data in the Humanities, and a Trustee of Conductive Music, a UK-based charity that focuses on providing educational resources that bring music, science, and creativity together in education.