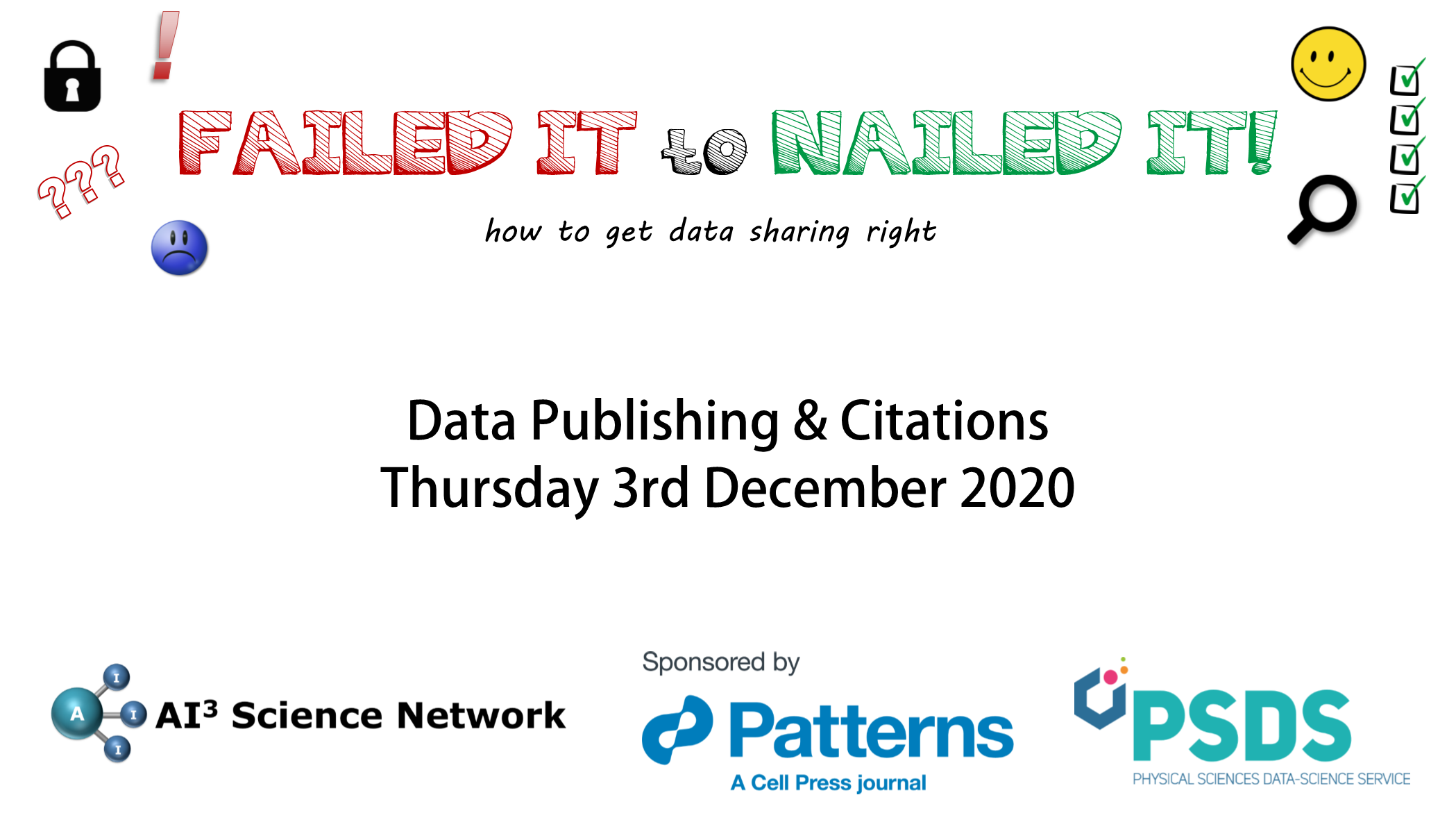 This event was the fourth of the `Failed it to Nailed it’ online data seminar series. The event was hosted online through a zoom conference. The event ran for approximately 3 hours in an afternoon session. There were 3 talks given on on data publishing, data citations and supporting information for publications, covered mainly from a domain agnostic point of view. These talks were followed by an interactive panel session with experts from each of these topics talking about their experiences with the different issues in these areas. Dr Samantha Kanza and Dr Nicola Knight produced a full report on this event summarising both the talks and the panel session which can be found here: [Link coming soon]. Below are the three videos of the talks with speaker biographies, followed by details of the Panel.

Sarah comes to Patterns from a 20-year career in creating, managing, and analyzing scientific data. Her research started as a combination of radio propagation engineering and meteorological modeling, then moved into data citation and publication, visualization, metadata, and data management for the environmental sciences. She was editor-in-chief of Data Science Journal for 4 years and has more than 100 publications. Her personal experience means she understands the frustrations that researchers can have with data. She believes that Patterns will bring together multidisciplinary groups to share knowledge and solutions to data-related problems, regardless of the original domain, for the benefit of humanity and the world.

Jez Cope is Data Services Lead in the British Library’s Research Infrastructure Services team. He is responsible for the Library’s research identifiers service in conjunction with DataCite, and for implementing the Research Data Strategy. He has over 8 years of experience developing and delivering research data management services and strategies at research-intensive higher education institutions in the UK, as part of a long-term goal to help communicate and collaborate more effectively using technology; previous roles include research data management at University of Sheffield, Imperial College London and University of Bath. He graduated from Imperial College London with an MSci in Joint Mathematics & Computing. He is an experienced teacher and is involved with grassroots-driven data & software skills training organisation The Carpentries, as a Certified Instructor and early contributor to Library Carpentry. He is particularly interested in elevating the status of research software alongside research data in the scholarly record, and helping researchers develop the skills to make the most of this.

Professor Henry Rzepa since 1971 started as a synthetic chemist and then became a computational and information scientist and a spectroscopist. These research activities have generally generated large amounts of data and early on he became increasingly concerned that this vital research product was rarely treated as what is now called a first class scientific citizen. Since 2005 he has been trying to elevate his group’s data to this status, using a combination of ELNs (electronic laboratory notebooks) closely coupled to what is now three generations of data repositories, to try to achieve its FAIRdom (Findable, Accessible, Interoperable and re-usable).