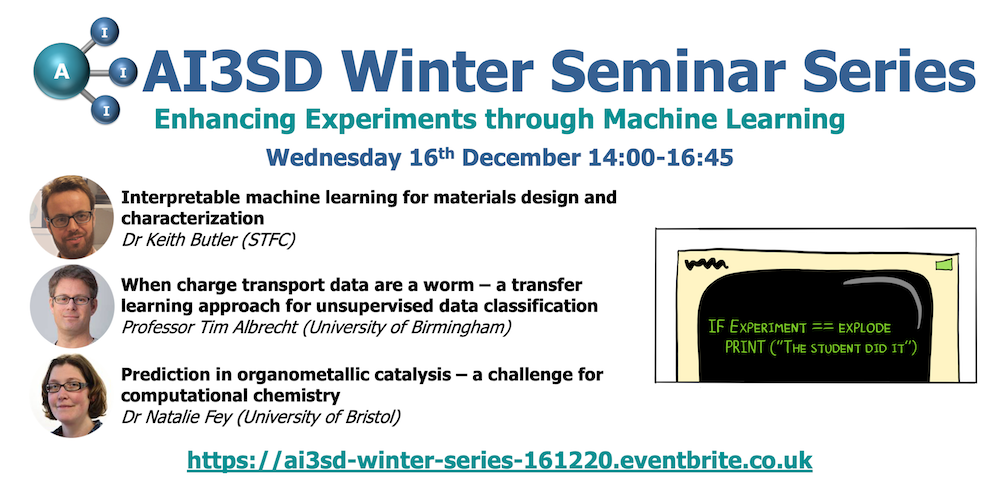 This seminar was the third of ten in our AI3SD Winter Seminar Series. This seminar was hosted online via a zoom webinar. The event was themed around Enhancing Experiments through Machine Learning and consisted of three talks on this subject. Below are the three videos of the talks with speaker biographies, and the full playlist of this seminar can be found here.

Keith Butler is as a senior data scientist working on materials science research in the SciML team at Rutherford Appleton Laboratory. SciML is a team in the Scientific Computing Division and we work with the large STFC facilities (Diamond, ISIS Neutron and Muon Source and Central Laser Facility for example) to use machine learning to push the boundaries of fundamental science.

Tim studied Chemistry at the University of Essen in Germany from 1995-2000. Following brief research visits at the European Joint Research Centre in Ispra in Italy and the University of California at Berkeley, Tim graduated with a Diploma in Chemistry (equivalent to a Masters degree) in early 2000. After graduating, Tim joined Peter Hildebrandt’s group at the Max-Planck Institute for Radiation Chemistry (now Bioinorganic Chemistry) in 2000. Tim worked on charge transfer processes in natural and artificial heme proteins on metal surfaces using SER(R)S, single-crystal electrochemistry and electrochemical STM (in Jens Ulstrup’s group at the Technical Institute of Denmark (DTU). He obtained his PhD from the Technical University (TU) of Berlin in 2003 and afterwards returned to Ulstrup’s group as a postdoctoral fellow. In 2006, he moved to London to take up a lecturer position in Interfacial and Analytical Sciences in the Chemistry Department at Imperial College, where he was made Senior Lecturer in 2011 and then Reader in 2014. In 2017, Tim joined the faculty in the School of Chemistry at Birmingham University as Chair of Physical Chemistry and has been the School of Chemistry’s Director of Research since 2018. He is the coordinator of the School’s Interest Group “Data and Machine Intelligence”.

15:42 – Dimensionality reduction techniques can help with the unsupervised classification of such datasets, thus reducing the risk of information loss and user bias.

19:04 – Image recognition networks such as AlexNet, trained on vast amounts of unrelated image data, can classify single-molecule charge transfer data. This could be considered an example of Transfer Learning.

24:58 – Combing the Feature Extractor of AlexNet with an Autoencoder for dimensionality reduction, we are able to identify previously unknown sub-populations in single-molecule charge transport data.

34:28 – Large, application-specific datasets are not required to exploit the capabilities of Deep Learning in this context.

I was born in Frechen, Germany, but have lived and worked in the UK for quite a while now. I obtained my BSc in Chemistry and Economics from Keele University (UK), and stayed on to work with Jim Howell and Paul Yates towards a PhD (completed in 2001). After postdoctoral research with Rob Deeth at the University of Warwick until 2003, I worked as a postdoc on projects with Guy Orpen, Jeremy Harvey and Guy Lloyd-Jones at the University of Bristol before gaining an EPSRC Advanced Research Fellowship (October 2007). My independent research at Bristol is in computational inorganic chemistry and involves mechanistic studies of catalysis and the development of knowledge bases. I was appointed to a temporary lectureship in 2015, made permanent in 2017, and promoted to senior lecturer in 2018. I’m the programme director for Chemistry with Scientific Computing and the Deputy Director of Bristol Scientific Computing.