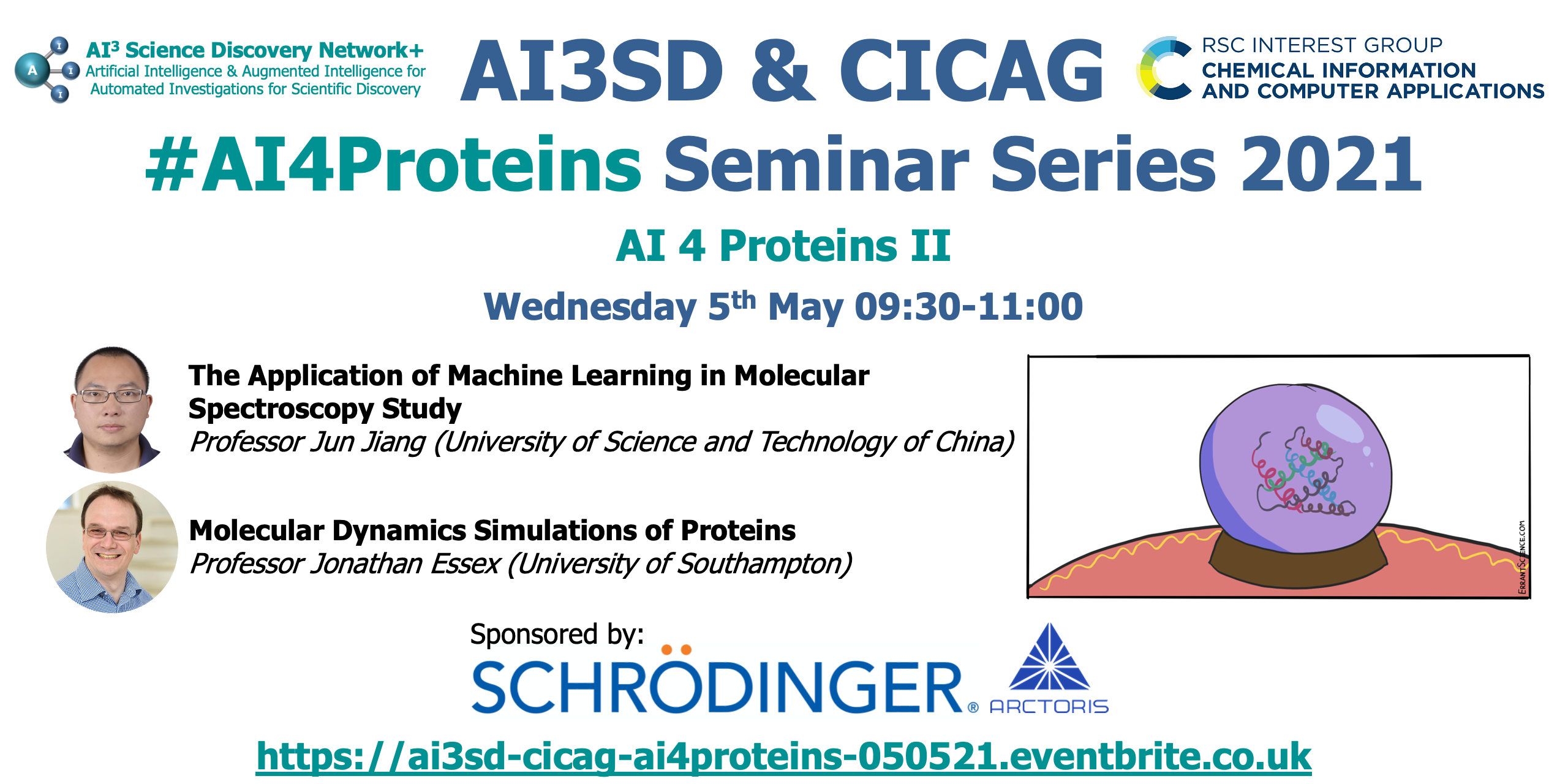 This seminar was the second in the AI3SD and RSC-CICAG AI 4 Proteins Series. This seminar was hosted online via a zoom webinar and the event consisted of two talks on this subject. Below are the speaker biographies, and the full playlist of this seminar series can be found here.

Jun Jiang is a professor at Hefei National Laboratory for Physical Sciences at the Microscale, University of Science and Technology of China (USTC). He received a B.S. degree in Theoretical Physics in 2000 at WuHan University, China, a Ph.D. degree in Theoretical Chemistry under the tutelage of Prof. Yi Luo in 2007 at Royal Institute of Technology, Sweden, a Ph.D. degree in Solid State Physics under the tutelage of Prof. Wei Lu in 2008 at Shanghai Institute of Technical Physics, Chinese Academy of Science. From 2008 to 2011, he worked as Post-doc at Royal Institute of Technology, Sweden and University of California Irvine under the tutelage of Prof. Shaul Mukamel. He joined the University of Science and Technology of China in December, 2011 as a Professor in Physical Chemistry. Dr. Jiang’s research interests focus on the development and employment of multi-scale modeling methods and Machine learning techniques, for simulating Charge kinetics in complex system. He targets on a wide range of physics or chemistry applications such as Photocatalysis, Biochemistry, Photochemistry, Molecular electronics and photonics. He has published more than 50 papers in prestigious journals such as Nature Energy, J. Am. Chem. Soc., Angew. Chem. Int. Ed. Dr. Jiang is a recipient of the “National Science Fund for Distinguished Young Scholars in China”, and has won the “Young Theoretical Chemistry Investigator Award of Chinese Chemistry Society”, “Distinguished Lectureship Award of the Chemical Society of Japan 2020”.

Jonathan Essex was an undergraduate at Oriel College, Oxford, and graduated with a first class honours degree in Chemistry in 1989. He then studied for a D.Phil. in computational modelling under the supervision of Prof W.G. Richards at the same institution. During his postgraduate degree he was supported by a Glaxo Research Scholarship. Having obtained his D.Phil. in 1992, he took up an SERC/NATO Postdoctoral Fellowship in the group of Prof W.L. Jorgensen at Yale University. In 1994 he returned to the UK to the University of Southampton as a Royal Society University Research Fellow. He was appointed Lecturer in 1997, Senior Lecturer in 2001, Reader in 2005 and to a Personal Chair in 2007. Jon was awarded the 2002 Marlow Medal from the Royal Society of Chemistry for his work in the development of techniques and application of molecular simulations to the study of proteins and related systems of biological importance. He was awarded a Royal Society Wolfson Research Merit Award in 2013. He is an Editorial Board member of the Journal of Computer Aided Molecular Design and an editorial advisor for BMC Chemistry. In addition, he serves on the Advisory Board of CCPBioSim, a collaborative chemistry project dedicated to biomolecular computer simulations, is a member of the EPSRC college, and has served on the Project Working Group for the procurement of HECToR, the UK’s next generation supercomputer.