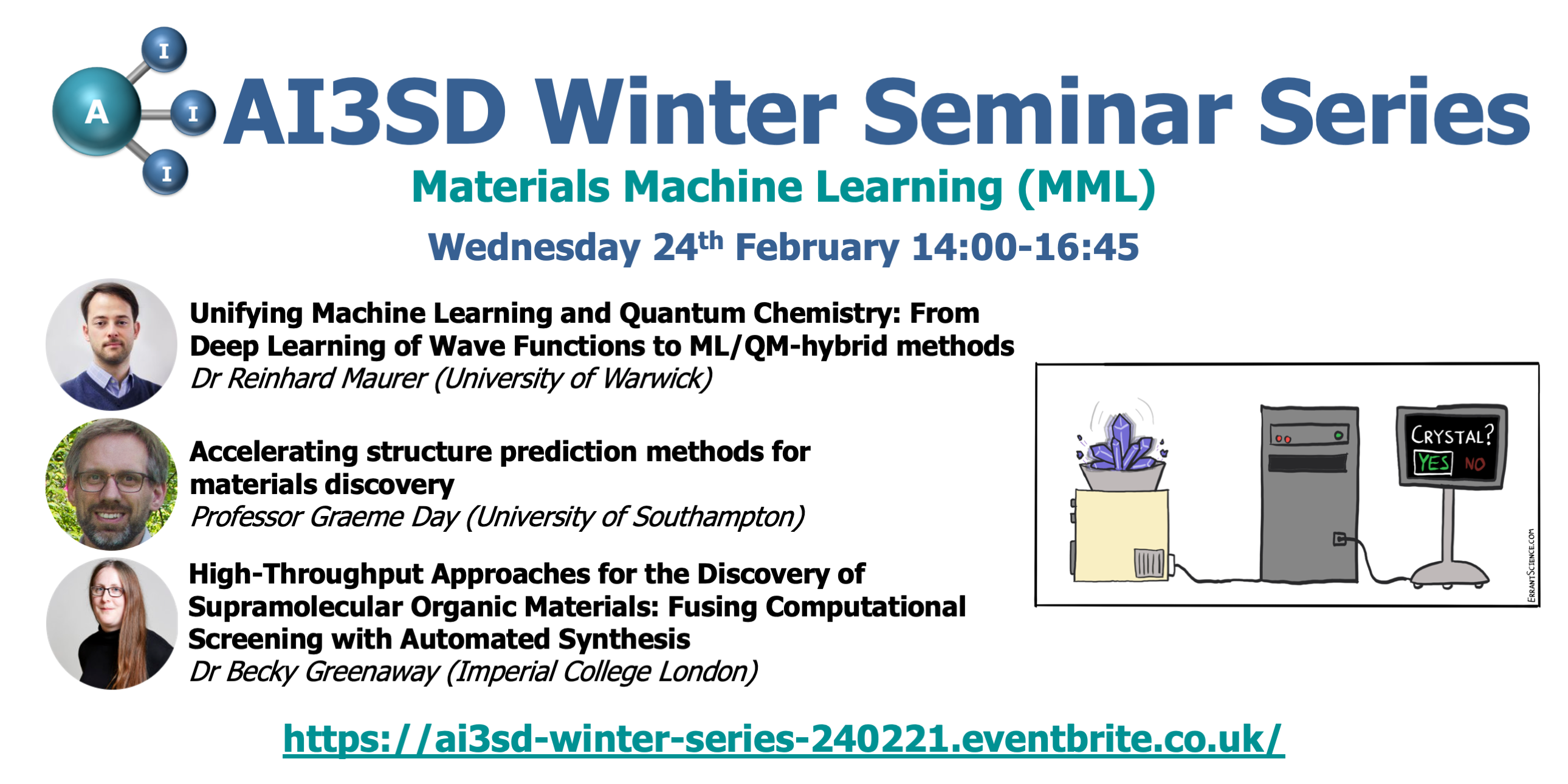 This seminar was the seventh of ten in our AI3SD Winter Seminar Series. This seminar was hosted online via a zoom webinar. The event was themed around Materials Machine Learning (MML), and consisted of three talks on this subject. Below are the videos of the first two talks with speaker biographies, and the full playlist of this seminar can be found here.

Reinhards research focuses on the theory and simulation of molecular reactions on surfaces and in materials. Reinhard studies the structure, composition, and reactivity of molecules interacting with solid surfaces. Reinhards goal is to find a detailed understanding of the explicit molecular-level dynamics of molecular reactions as they appear in catalysis, photochemistry, and nanotechnology. Members of Reinhards research group develop and use electronic structure theory, quantum chemistry, molecular dynamics, and machine learning methods to achieve this.

Graeme Day is Professor of Chemical Modelling at the University of Southampton. His research concerns the development of computational methods for modelling the organic molecular solid state. A key focus of this work is the prediction of crystal structures from first principles; his research group applies these methods in a range of applications, including pharmaceutical solid form screening, NMR crystallography and computer-guided discovery of functional materials. After a PhD in computational chemistry at University College London, he spent 10 years at the University of Cambridge, where he held a Royal Society University Research Fellowship working mainly on modelling pharmaceutical materials and computational interpretation of terahertz spectroscopy. He moved to the University of Southampton in 2012, at which time he was awarded a European Research Council Starting Grant for the ‘Accelerated design and discovery of novel molecular materials via global lattice energy minimisation’ (ANGLE). This grant shifted the focus of his research to functional materials, including porous crystals and organic electronics. In 2020, he was awarded an ERC Synergy grant ‘Autonomous Discovery of Advanced Materials’ (ADAM) with Andrew Cooper (Liverpool) and Kerstin Thurow (Rostock) to integrate computational predictions, chemical space exploration with automation in the materials discovery lab. Graeme has served on the editorial boards of CrystEngComm, Faraday Discussions and on the advisory board of Molecular Systems Design & Engineering (MSDE).

So, I guess what you’re talking about there is the molecular structure itself. That’s a good question, because all of the molecules that I showed you were chosen deliberately for these initial studies to be quite rigid molecules. This was so that the molecular structure would be very similar in the crystal to the single molecule calculations that we’ve done which are in vacuum, and we would assume also then similar in the solvent. That’s not the case as you get to more complex molecules. One of the big applications of crystal structure prediction is in pharmaceuticals where we’re looking for understanding whether there are more polymorphs of this molecule out there which would potentially have different properties. Pharmaceutical molecules are generally much more flexible, and we know that the conformation of the molecule in the crystal can be very different to what it is in the solvent and in the gas phase. To take account of that, what we have to do is to include intramolecular degrees of freedom, such rotatable bonds, at the very initial stage of generating trial crystal structures, at the same time that we sample the crystal packing degrees of freedom.  Then, also at the energy minimization stage we will have to allow the molecular geometry to relax within each crystal structure because we know for these flexible molecules that the environment in the crystal will influence the molecular structure. So we have to account for this at two stages of the structure prediction process.

Q2: Why is it OK to ignore entropy?

We do worry about entropy because typically crystallisation is performed at room temperature so the dynamics of the molecules within the crystals are important. We’ve done some studies where we looked at the phonon density of states – the vibrational density of states – of different crystal structures of the same molecule. These might be observed polymorphs, or different predicted crystal structures of a molecule. From the vibrational density of states, we then evaluated entropy differences between known polymorphs and within predicted landscapes. If you go back to an earlier slide from my talk where I gave a reference for polymorph lattice energy differences, the main point of the study in that paper was to look at the lattice dynamical contributions to the free energy differences. What we found was that the typical entropy contributions to free energy differences if you then calculate them at room temperature are about 1/3 of the typical differences in the static lattice energies. So, these contributions will re-rank structures, but will be less important than the static energy differences. If you want to be very accurate then we know that we have to include the entropy and that might be an area for future work: to try to speed that up through machine learning as well, to predict these vibrational densities and states. But that’s why we, in a first approximation, can ignore entropy differences because we know their magnitudes are typically smaller than the static energy differences.

Q4:  How many atoms were in the hybrid functional DFT calculation that would have taken 101 days without parallelization?

Q5:  When you fit the difference between levels of description, do you treat intra and intermolecular degrees of freedom differently?

That’s not something I covered in the talk because in this work we dealt with rigid molecules, and all of the energy corrections that we were applying were single point corrections. So, the force field calculations were done with a rigid molecule approach and so the intramolecular energy for every crystal structure is the same. All we’re learning are intermolecular energy differences. We’re doing follow up work to look at flexible molecules where we have differences in intramolecular energy as well. That’s not something that we have completed. We do know from work we’ve done several years back that we can use Gaussian processing to learn the intramolecular energy surface as well, but whether the same model will learn both together or we need to build separate models, we don’t know yet.

Q6: How do you treat dispersion in your high-level electronic structure calculations?

In our all of the work we used an empirical dispersion correction from Grimme which looks like a force field term. We have looked at other things, like many body dispersion models, as well because we know that that these can sometimes help distinguish structures.

Q7: Could this be applied to crystals with inorganic atoms in them, like metal organic frameworks?

Possibly. I don’t see why it couldn’t be applied. The way that we generate crystal structures is different if you have a network solid like a metal organic framework. You don’t have distinct units like you have molecules in molecular crystals because everything is connected through those metal centres in that example. However, once you’ve generated structures, then similar types of approaches could probably be used to then learn corrections to the calculated energies. This is a little bit of guesswork, as I haven’t done it, but I don’t see why it wouldn’t work. The interactions are different, and so things about the descriptors may need to be different, but I think the overall approach should probably be successful.

Q8: What are the problems when the molecular conformation space is large in addition to just a large space to sample?

When the conformational space is large then really, we just have a higher dimensional surface. So, we know for some drug molecules you may end up with hundreds of molecular conformations.  If you’re going to sample those degrees of freedom at the same time as the crystal packing degrees of freedom, then your sampling space is much larger, and as your number of degrees of freedom go up then your sampling becomes more difficult. You need to generate more structures and you may need to be smarter in the way that you generate trial crystal structures. Some of it’s an open question of the best way to do things, but essentially, it’s just higher dimensions of the energy surface that we’re sampling. Also we’re then talking about conformations versus intermolecular interactions in different possible crystal structures. The scales of inter and intramolecular energy differences can be quite different, and that can cause additional problems as well. Rather than going on for another half hour talk on this topic, I’ll stop with that short answer.